A Reflection on the Parable of the Sower - Matthew 13

Having had the opportunity to grow up on a dairy farm and to work with farmers almost all of my life, I would have to say that most farmers are indeed optimistic about the future.  Every year in the spring they plant the seeds for their crops with the high expectation that they will have a good crop to harvest in the fall.  They will repeat this practice each year, even if they have experienced a crop failure in the prior year.  It is a way of life; they till the soil, spread the fertilizer, plant the seeds, cultivate the crops, control the weeds, irrigate the fields, and do whatever they need to do to ensure that they will have an abundant harvest in the fall.  Then, when the crops are mature, they harvest the crops.  Sometimes the harvest is abundant and sometimes it is not.

The farmer may have done everything possible to ensure a good crop but cannot control the outcome, because he or she must rely on God to provide the optimum growth.  Still regardless of the outcome, after the crops are in, the farmer will make plans for the next year, with the optimistic hope that his yields will be better than ever before. 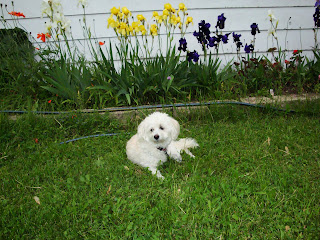 I was thinking about the parable of the sower found in Matthew 13.  This is a story Jesus told to his disciples about a farmer who was sowing seeds.  Sowing is a form of planting seeds that involves throwing them in a semi-circular pattern.  This form of planting seeds was somewhat crude and tedious but it was the standard practice of that time.  The farmer in the story wanted to make sure that he hadn't missed any opportunities for his seeds to grow, so he threw them everywhere.  If there was even a chance that the seeds would grow in some soil, regardless of where or what condition that soil was in, he threw his seeds in that direction.

In the story we are told, “as he was scattering the seed, some fell along the path, and the birds came and ate it up.” Matthew 13:4 (NIV).  I asked myself, “Why would the farmer throw the seeds on a path knowing that the birds were waiting there to eat them up?”  When I was farming, we were careful to place each seed in its proper row; not to many, not to close, not to deep, with just the right amount of dirt covering them up.  However, to just throw the seeds out where birds could eat them or in the rocks where you couldn't get at the crop with the proper machinery for harvesting, well, that would have been considered a waste of “good seed”.

Two thoughts occurred to me. The first is that the farmer used a path that went through the middle of the field to get the seeds into the fertile soil, in the process some of the seeds would by chance land on the path.  Second, some seeds could have potentially found find a place to take root in small cracks in the path and have grown to produce a crop.  It seems that this farmer was willing, for the potential of the future harvest, to scatter his seeds in every possible place they might grow.  Truly, this man was an optimist!

As Jesus explained the meaning of the story, we discover that these weren't cheap seeds but ones that the farmer had paid a huge price to acquire.  The farmer in this story is God.  The seed is the saving Word of Christ, purchased with His life and death on the cross.  This seed will ultimately produce a harvest of eternal life for those people in whose hearts it takes root and grows to maturity.  The soil represents people in the world who will react in different ways to God’s Word.  We know that some people are prepared to hear God’s Word.  It grows in them and produces an abundant crop.  But, some people resist the Gospel.  They are hard like a path and God’s Word just sits there on the surface until Satan comes and snatches it away.

Is it a waste then to proclaim Christ to those who are unbelieving?  NO, even the hardest paths have cracks!  Look at what happens to a driveway or even a road if it is not being used regularly, it doesn't take many years before weeds and dandelions start to grow in the cracks.  If this can happen in pavement, just think what could happen in the heart of an unbeliever when the power of the Word starts to take root in their lives.  Let’s be optimistic and continue to BOLDly proclaim the good news of Jesus Christ as our Savior and Lord.