"I have taken refuge in the Lord.
How can you say to me: 'Flee to your mountain like a bird? ...
When the foundations [of life] are undermined, what can a righteous person do?'
The LORD is in his holy temple.
The LORD's throne is in heaven.
His eyes see.
They examine Adam's descendants.
The LORD tests righteous people, but he hates wicked people and the ones who love violence. ...
The LORD is righteous.
He loves a righteous way of life.
Decent people will see his face." Psalm 11: 1, 3-5, 7
(God’s Word, Copyright 1995 by God’s Word to the Nations Bible Society, http://www.godsword.org/). 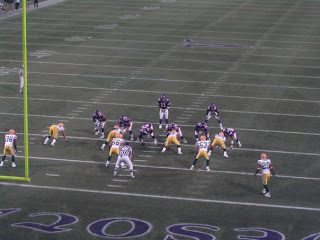 As I am writing this we are in the depth of the fall football season. High school playoffs are underway. College teams are playing for bowl game appearances and pro teams are making a push for playoffs and the Super Bowl. Several years ago, I also played on a football team. My position was on the offensive line. When I was a senior in high school I was the starting left guard (first person to the left of the center) and also played center (the guy who hikes the ball to the quarterback). I weighed 155lbs fully dressed in my game gear and pads. Most of our opponent's linemen had 25 to 50lbs on me. On pass plays the offensive linemen had one job to do – that was to HOLD THE LINE and protect the quarterback until he was able to throw the ball downfield to an open receiver. The defensive linemen also had one primary job and that was to run over, around or through us (the offensive line) to get to the quarterback before he could throw the ball. It may have been easy for the fans or the coaches and other teammates to scream "HOLD THE LINE" at us, but it was not so easy for us to do it when our opposition was bouncing us around. There were a few games where our team so beaten up and demoralized by our opponents that we could hardly wait for the game to end. We were not only defeated but also totally humiliated by our opponents.

Sometimes my life is like a football game and I feel like I am getting bounced around. The opposition is screaming at me. Common sense is telling me to run away. I hear voices telling me to "flee to the mountains like a bird" or "save yourself, run for cover" or "look for an easier way out." I think you are getting the picture; it is difficult to stand firm in our beliefs when everyone and everything seems to be standing in opposition to us. When David faced these trials he turned to his people and stated with confidence, "I have taken refuge in the LORD. ... His eyes see. ... The LORD is righteous. ... Decent people will see his face."

Let me take the liberty to paraphrase his thoughts, "Don't tell me to run when God is watching out for me. I will trust in Him to protect me. I will HOLD THE LINE. I will not run because God is fighting with me. He is testing me. He is righteous and will do what is right for me. I will stand in his presence and wait on Him to deliver me from those who are oppressing me."

God spoke to us His words of promise through the words of David's pen. David's courage and faith become instrumental in giving us courage and faith to stand firm in the promises of God. God's promises have already been fulfilled for us in Jesus Christ. In Christ, God has destroyed our enemies – sin, death, and the devil. In Christ, God looks out for us and provides us with the gift of eternal life. In Christ, we are given God's righteousness and the certainty that we will see Him face to face.

We are no longer on the losing team waiting for the clock to run out, but rather we are on the winning team anxiously waiting for the end of the game. Satan, defeated and humiliated, is throwing cheap shots and punches at us. He is a sore loser. But he cannot destroy us because we are living in Christ by God's grace through faith. David's words in this Psalm remind us to set our focus on Jesus Christ, the righteous Son of God. In Christ, we can take refuge and stand firm against our opponent, Satan. With BOLDness we can "hold the line" and BOLDly proclaim this good news to others.